Category 1:  Professional – regularly gigging acts that exist as a business to earn an income.  Members earn a regular full-time or part-time wage from these endeavours.

Category 2:  Weekend Warriors – bands that play gigs less often, primarily for personal enjoyment but also get paid for their efforts.  Members all have full time day-jobs, as the gigs don’t happen often enough/don’t pay well enough to be a full-time concern.

Category 3:  Hobbyists – bands that exist purely for the pleasure of playing music.  These bands either never get out of the rehearsal room, or maybe play once a year at a friend’s birthday party, or on open mic nights.  They don’t want to deal with the pressure and additional running around that goes with playing for a paying audience or venue, but do generate a lot of fun and personal satisfaction for the band members.

To be clear at the outset:  as long as everyone within the band is on exactly the same page about their vision and goals, all three categories of bands are perfectly legitimate and playing in them can be a very rewarding experience for their members, albeit for potentially different reasons.

However, this article is aimed squarely at those bands who inhabit Category 2: Weekend Warriors.   I go out and watch as many bands as I can, and my personal view is that many Category 2 bands would benefit greatly from behaving a bit more like most Category 1 acts.  And there’s a reason for this.  When it comes to playing pubs and clubs, often Category 2 and Category 1 bands inhabit the same spaces.

What do I mean by this?  The venue that’s booking a Weekend Warrior band this week may have had a band loaded with full time professionals playing the month, week or even the evening before.  Often the difference between a Category 1 and 2 band is not the venue they play at, it’s simply the frequency of booked gigs.

Now, assuming our Weekend Warrior band wants to keep playing (when it suits them) on a regular to semi-regular basis, it’s important that they produce a quality product for either paying punters or paying venue owner.  Even though they may not be keen or able to play as often as the pros do, they still don’t want to suffer in comparison.  This is simply because a poor showing may mean future bookings dry up.  In a competitive marketplace, these bookings are hard won and easily lost.

Want to impress the venue, the punters and keep those bookings coming in?  Here are my top tips to make your Weekend Warrior band indistinguishable from a fully professional outfit.

Finishing where I started, I strongly believe Weekend Warriors have just as much right to exist as the seasoned professionals. Rightly or wrongly though, Category 2 bands will be compared to Category 1’s by the punters and venue owners.

I can guarantee you that if you apply the above principles, your band will be viewed as a pleasure to watch and deal with by all concerned, which in turn will make those coveted repeat bookings all the more likely.

Paul Bindig is a regular contributor to The Keyboard Chronicles, and currently a member of both a Category 2 and Category 1 band. 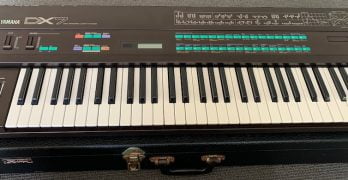 Oh the fun day I've had. Yesterday I took delivery of an original DX7 (see … END_OF_DOCUMENT_TOKEN_TO_BE_REPLACED