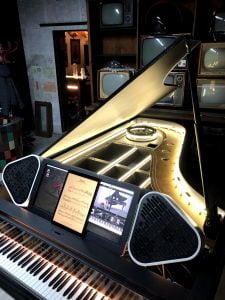 As you may have already seen, we were a little  blown away by Eduard Schneider’s amazing DIY project with an 1886 grand piano. We were so impressed that we asked the man himself, Eduard Schneider to answer a few questions on the project, and he kindly responded in addition to providing some amazing pictures that you can see in full in the gallery below.

KC: When did this passion start for you?

ES: Electronic music has been my passion since my childhood. I grew up in Romania, a communist country in the 70s and 80s and electronic (instrumental) music was the only music style from the western world that was allowed to be aired on radio. As soon as I could afford equipment, I bought some and started to make music myself, not only listen to other people’s music. Transforming old things which have lost their utility by breathing new life into them has become a more recent passion, about 5 years ago. Here is some more insight: https://www.facebook.com/fromjunktosteampunk

KC: Can you describe the specific 1886 piano you have modified?

ES: Yes, it is the largest size Grand Piano I have seen (although I don’t know much about pianos) and the friend of a friend bought it with an old house. It’s a Pokorny – who was a pupil of Boesendorfer. As it was partly damaged by moisture and beyond repair, it was given to me and so I saved it from becoming firewood. I did not know the year until I removed the huge metal plate, which had the year handwritten underneath it. Nobody has seen that writing in 130+ years …

KC: How many hours did the restoration take from start to finish?

ES: I have not counted the hours, it must have been many hundreds of hours, from cleaning the dust, removing the strings (most of them rusty), making the custom subwoofer snug fit into the tail, performing the paint job and making the electronics & automation, etc. Dozens of people have been involved and contributed with their passion and skills to help me make my crazy ideas to become reality. Unfortunately I have not  filmed all the steps of the process, but quite many – enough to make a nice documentary, which I will make time to edit at some point.  Acoustic Density – who made the custom speakers and subwoofer were the only company involved, all others were just friends and enthusiasts like me. Here is some insight of the process – a small fraction of it:

KC: Can you explain exactly how the piano is linked to the software?

ES: I ended up buying a used Doepfer PK-88GH keyboard – which was the cheapest hammer action keyboard I could get. Unfortunately, it was an old version, with just Midi Out, no USB. So I had to add a Midi interface between the keyboard and the Mac Mini, which runs any DAW or Software and so makes it one hell of a Midi keyboard. Some say it’s a waste of space for only “being nothing more than a Midi controller” but I tell you, the feeling you have when you sit in front of it and start playing … that’s priceless.

Layering the Grand Piano sound with a Modular Synth such as those from Arturia opens completely new perspectives to the piano player who would normally expect this huge thing to be nothing more than a piano. In theory, as the Mac Mini is connected to the internet, it should be no problem to play the piano remotely in realtime, let’s say by somebody with a Midi keyboard in the US – something I have not tried yet, but soon will. I run Cubase 10 Pro and Ableton as DAWs, with Arturia V-Collection 7. Somebody commented on YouTube: “this is the utmost setting for playing piano digitally”. I take that as a great compliment.

KC: Is this likely to be a once-only piece or could you see this becoming a business for you?

Yes, I think this will remain a once-only piece and I don’t see myself making these as a business, although if concerts and gigs will keep us artists from earning money, I might reconsider that :). I have other crazy projects in progress, such as the military communication switchboard which I call “SheVa” and a Harmonium from 1900 which will be converted into something their makers never dreamed of :). Imagine going modular on these old cabinets …

All of these I made for fun and not with business in mind. I might not have the most expensive and sophisticated equipment in my studio but I may compensate a little by the “unique character” of these instruments. Here is a presentation of the place:

KC: Where / when do you plan on demonstrating this great creation? I can imagine most major industry showcases would love to have this there?

ES: Well, as for now, because of the Covid-19  situation, there is no other place to demonstrate it than online, on my YouTube channel, but I’m open for proposals. Although it’s much lighter than it was in its original state, we are still looking at about 400 lbs …

So far, I have won the Grand Prize award of the Arturia Sound Explorers contest but no other software / hardware manufacturer. There is still a lot of potential to showcase products on this instrument, in a very special way. By the way, I’m a filmmaker and I know how to make things shine 🙂

KC: If people want to make enquiries of you, where should they contact you

ES: They can email me at edi.schneider@gmail.com or look me up on Facebook as “Eduard Schneider” or Instagram “edischneider13”

And now onto some amazing pictures of the grand piano, the ShEva and more. Click on any pic for the full-size versions. Warning: drooling may ensue.

We for one think that Eduard’s creations would have one hell of a niche in the industry – what do you think? Would love to hear your thoughts in the comments.

We’ve only been following this project relatively recently, but it’s certainly caught our attention. We’ll be featuring an interview here with the brains behind the operation, Eduard Schneider, but in the meantime lay your eyes on this:

Podcast only: get new episodes by email